Originally from Turkey, Givech is actually the name of traditional clay pots used in Turkish cuisine, and also the name of the meat and vegetable stews cooked in these pots. However, Givech is not restricted to Turkey. It has spread to many countries in the Balkan area and the Middle East, where people use the name for their variations on vegetable stews similar to Ratatouille.

Also, grandma’s recipe consisted of eggplants, red bell peppers, courgettes, potatoes, onion and tomato. Mom added carrots and sometimes hot peppers, and got rid of the potatoes. As you can see, grandma’s idea of the Givech was to make a mouthwatering vegetable stew. Mom, on the other hand, wanted it to suit her low carb, low fat diet.

My recipe uses all the veggies mentioned above. I do not skimp on the oil, but I do not go crazy either. Since I love the eggplants fried but don’t want to use a lot of oil, I bake them in the oven using oil spray, and then add them to the stew. This version really captures the best of both worlds – it is delicious, but suits a more moderate diet.

Preparation:
Preheat your oven to 400F.

If using Japanese eggplants, you may skip the following step. Japanese eggplants are very delicate and their skin is thin so you do not need to roast or fry them before adding to the pot. Just add them raw with the other veggies. If you really like them fried, though, go ahead and fry or roast them as specified in the next step.

In a large sauté pan heat four tablespoons of oil on medium high heat, and sauté the onion for two minutes. Add the bell peppers, hot pepper, and the carrots, and keep sautéing for another five minutes, stirring occasionally, until the veggies start to brown.

Add the potato to the pan and sauté for five minutes, stirring to make sure the potato does not stick to the pot. Add the zucchini and the roasted eggplant (or the raw Japanese eggplant) and stir gently for 2 minutes.

Add the tomatoes, salt, and black pepper, give the dish a final stir. Cover the pot, lower the heat to medium-low, and cook for about thirty minutes. There may be some veggie juice left on the bottom of the pot, which is fine, as long as you don’t end up with soup. If you have a lot of liquid left, remove the lid and cook the veggies over high heat, until most liquid evaporates.

The Givech can be served hot or cold, as a side dish, or as a vegetarian main dish. I also like to serve it as part of a mezze platter.

* Freshen the flavor – chop some fresh basil leaves and add to the pot after removing from the heat while the Givech is still hot. It really changes the flavor and makes a nice, fresh variation. 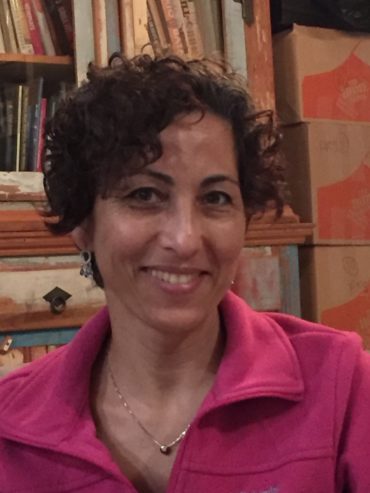